King Saul was in a fix. The Philistines had gathered their army to make war against the Israelites. When the Israelites saw that they were greatly outnumbered they were fearful and fled, hiding in caves and thickets among the rocks and in holes. Some even crossed the Jordan River to safety on the other side. 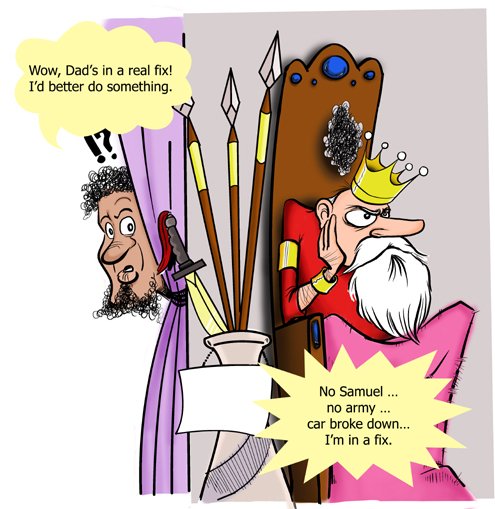 This left a small band of only 600 men camped with Saul and his son Jonathan near the town of Micmash. This was the moment of weakness the Philistines were waiting for. They sent raiding parties out in a three-pronged maneuver to prepare for assault, and one detachment had approached the rocky pass at Micmash.

Among the meager troops of King Saul there was one soldier who was undaunted by the advantage of the enemy. It was Saul's own son, Jonathan.

"Come, let's go over to the Philistine outpost on the other side of the pass," Jonathan said to his armor bearer. But he did not tell his father about his plan; in fact, no one was aware that Jonathan had left the army encampment.

As Jonathan approached the high cliff on the other side of the pass he spoke courageously to his armor bearer, "Come, let us go over to the garrison of these heathen. It may be that God will work for us. The Lord is not limited to save by many or by few."

Jonathan’s declaration of faith so moved his armor bearer, who then said, "I am with you heart and soul!"

Cautiously the two soldiers began the climb up the steep rocky wall leading upwards to the enemy garrison. As they reached a point not far from them, Jonathan said, "Come, let us move out into the open and let the Philistines see us. If they say, 'Wait there until we come to you,' we will not go up to them. But if they say, 'Come up to us,' we will climb up, for that will be a sign to us that indeed the Lord has given them into our hands!"

Jonathan and his armor bearer came to an opening where they could easily be seen. As soon as the watchmen of the Philistines saw them, they roared mockingly, "Look, the Hebrews are crawling out of the holes they were hiding in!"

Then the men shouted down to them, "Come up to us and we'll teach you a lesson." 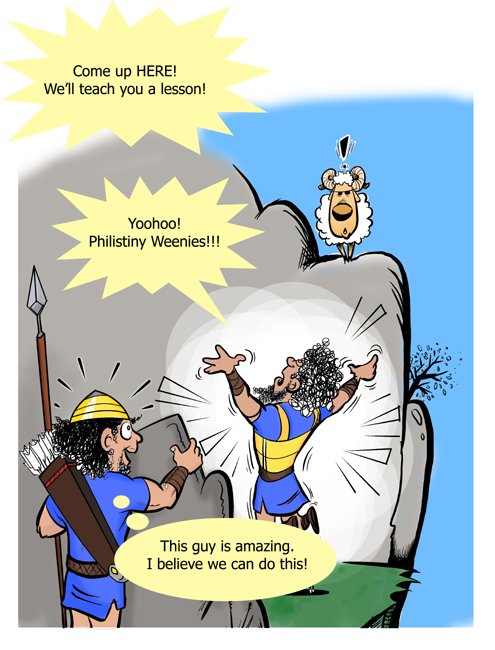 It was the sign that Jonathan had hoped for, and with the voice of assurance he said to his armor bearer, "Climb up after me. The Lord has given them into the hand of Israel!"

The two brave soldiers were filled with faith as they scaled the last stretch of the rocky height. Arriving at the top, the young warriors drew their swords, slaying twenty men.

Then panic struck the army of the Philistines—those in the camp and field, those in the outposts and raiding parties—and suddenly the earth began to quake and tremble! As Saul's lookouts saw the enemy army "melting away" they took courage and rallied together.

When Saul discovered that Jonathan and his armor bearer were gone, he sent his men into the battle, only to find the Philistines in total confusion, even slaughtering each other with their own swords. Then even the Israelite soldiers who had abandoned camp and had hidden themselves in the hill country for fear of the enemy came out to fight. When the Philistines saw them coming, they started to run, and the men of Israel followed in hot pursuit. A truly great victory was won!

On that day the Lord rescued Israel through the courageous faith of young Jonathan and his armor bearer. 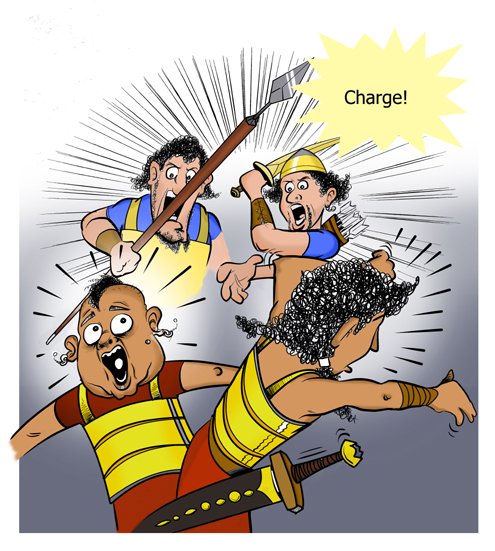 Don't underestimate the power that God can give you. If you've got God with you, you're unbeatable, no matter how small you are. One man and God are a majority.

"And this is the victory that overcometh the world, even your faith" (1John 5:4 KJV).

Think about it: Jonathan asked God for a sign to make sure that what he was about to do was God’s will for him. Sometimes we don’t have the courage for something, and it’s because it isn’t God’s will for us. But most importantly we need to ask God what His will for us is. Is God asking you to do something seemingly scary? If it’s His will for you, He will give you the courage (faith) to do it.

Contributed by R. A. Watterson. Illustrations by MJ.
Copyright © 2010 by The Family International