A retelling of 2 Kings, chapter 6

During the time of the prophet Elisha, the neighboring king of Syria had declared war on Israel. However, something went wrong with his campaign. Every time he planned an attack or an ambush, the king of Israel heard about it and prepared for it.

This happened not once or twice, but so many times that the king of Syria was sure he had a traitor in his camp. Sending for his officers, he said to them angrily, “Who is spying for the king of Israel?” 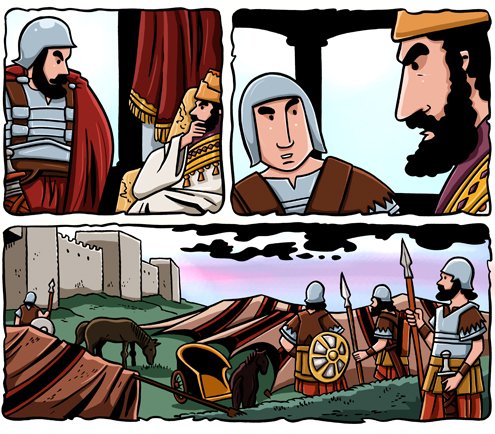 “Not one of us, O king. It is Elisha, the prophet that is in Israel, who tells the king of Israel the words that you speak in your private quarters,” replied one of his servants who had somehow heard of the power of Elisha's God.

Now the problem seemed easy to the king—get Elisha, and all the trouble would be over. The king ordered horses, and chariots, and a great army to go to Dothan, where Elisha was staying, to fetch this man who knew too much.

Thinking to take Elisha by surprise, the army arrived by night and surrounded the city. There seemed no way of escape for the man of God.

Early the next morning, when Elisha's servant looked from the city wall and saw all those horses and chariots, he was frightened. Running to Elisha, he cried, “Master! What shall we do?”

But Elisha's trust in God was great. “Fear not,” he said to the frightened young man, “for those who are with us are more than those with the Syrian army.”

The young man stared at him. How could this be? There was nobody in Dothan ready to fight these Syrians. Did Elisha have some secret army?

Elisha prayed, saying, “Lord, I pray that You will open his eyes that he may see what mighty power surrounds us.”

God answered his prayer, and the young man suddenly saw the armies of heaven that Elisha had seen all along!

“Look!” he cried excitedly. “Look at them all!” 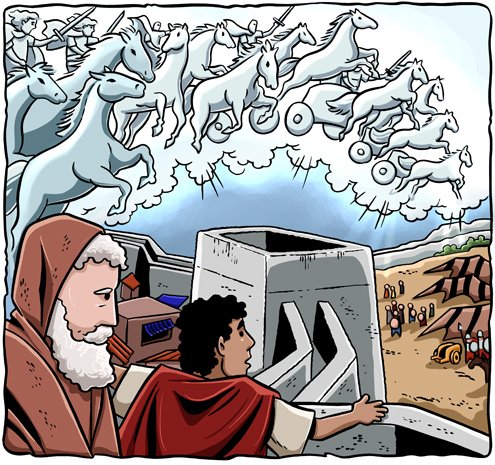 The mountain was full of heavenly horses and chariots of fire round about Elisha.

And when they came down to him—those chariots of fire he had seen once before[1]—Elisha knew God was very near, and he prayed, “Smite this army with blindness.”

It was a strange request, but Elisha had a wonderful plan in mind. God answered Elisha’s prayer and smote them with blindness. Then Elisha walked out of the city gate and bravely approached the leaders of the Syrian army, who were milling about, not knowing where they were or what to do.

“This is not the way, nor the city,” Elisha said to the blinded soldiers. “Follow me, and I will bring you to the man whom you seek.” They didn’t know that he was Elisha, the one they sought, and he was then able to lead them to Samaria—right into Israel's capital!

When he had them all safely inside the city gates he prayed, “Lord, open the eyes of these men, that they may see.” God did so, and the soldiers saw that they had been fooled and were now in the midst of Samaria, surrounded by their foes!

The king of Israel was delighted. Here was a splendid chance to teach the Syrians a lesson they would never forget. “Should we smite them? Should I smite them?” he said to Elisha with pleasure. 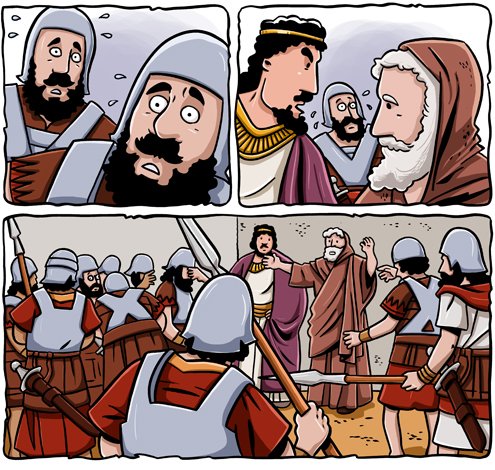 “No, indeed!” replied Elisha. Instead, he ordered that food and water be given to the prisoners, and that they be set free to return to their homes.

You and I can have the protection of Elisha’s secret army, too. The Bible says, “The angel of the Lord encamps around those who fear him, and he delivers them” (Psalm 34:7 NIV).